Have you ever purchased a new LED light expecting the same warm, yellow light as the light you replaced, only to end up with a much brighter, whiter light instead? Chances are you neglected to consider the light’s color temperature before making your purchase. Nothing turns people off from making the switch to LED or fluorescent lamps like accidentally selecting a light in the wrong hue, so we figure it’s about time for us to revisit this topic in a new light. 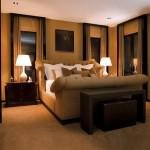 Lights with color temperatures between 2700K-3500K are considered “warm.” Warm light is standard in most homes because it strengthens the reds, oranges, and yellows commonly used in residential color schemes. Warm light is often used in bedrooms or living areas to create a cozy atmosphere since it’s softer and easier on the eyes than bright, cool-toned light. It is also often used for general lighting because people tend to look better in warmer-toned light. If you’ve noticed that more of your flaws show in your bathroom mirror than your bedroom mirror, it’s because many homes have cooler lighting installed in the bathroom.

Although warm light is the norm, some people prefer cooler light in their homes. Cool light (4000K-4500K) is more common in homes decorated in blues, greens, whites, or other calm hues that higher color temperatures tend to accentuate. In contrast to warm light, cool light creates an energizing and refreshing mood – the reason many people prefer it in studies or home offices. As mentioned before, cool white light makes imperfections and color variations between objects more
apparent. While this may not always be ideal, it is useful for applications like makeup lighting or even general lighting in rooms where cleanliness is imperative. For these reasons, even when cool light isn’t used throughout a home, it typically appears in kitchens and bathrooms.

While color temperature is important for creating ambiance in a space, you may also want to consider how it makes your wall paint or furniture appear in light. Installing warm light in a room decorated in cool-toned colors can cause your room to appear faded and lackluster, and the same goes for cool light in a warm-toned color scheme. This happens for the same reason why you sometimes buy something you thought was black in the store only to discover it’s actually navy in natural light: no color is definite because its appearance also depends on the quality of your lighting. Colors may be even further distorted by secondary characteristics such as brightness or color rendering, the effects of which are detailed further in our post on choosing light for paint colors. Overall, you’ll want to stick to the above rules of thumb, but keep in mind that color temperature can also have a dramatic affect on the look of your home – so choose wisely.

About the Author: Paul Ko